Apply to serve on a committee of the National Association of REALTORS®. Through May 23, members can submit an application to serve on up to five NAR committees. The process, including completing an expertise profile and seeking endorsements for your application, takes place entirely online – making it easy to manage. In addition to the “at large” spots, some committees have a seat earmarked specifically for an NAR affiliate representative. To be considered for these appointments, you must have submitted an application.

While you may be giving your time and talents to NAR, there’s much to be gained in return.

WCR member Sherri Meadows says, “Leadership is an incredible opportunity to achieve personal and professional growth and in doing so, to set an example for others. It is a platform to change lives!”

Deena Zimmerman, 2016 NAR Committee Liaison to the Commercial Group, has a similar perspective. “I encourage everybody to apply for an NAR committee. I still pinch myself! It’s amazing to be in a room with so many incredible professionals from around the country sharing their thoughts and opinions. It’s a truly incredible experience that I am blessed to be a part of.”

Here’s how to apply:

Deadline for submission is Monday, May 22 to Kentucky REALTORS®, by mail (2708 Old Rosebud Road, Suite 200, Lexington KY 40509) or by e-mail (dharris@kar.com). Candidate interviews will be held on Friday, May 26 in Lexington.

The application form and detailed requirements are available here.

Kentucky’s seasonally adjusted preliminary March unemployment rate remained unchanged from February at 5 percent, according to the Office of Employment and Training (OET), an agency of the Kentucky Education and Workforce Development Cabinet.

The preliminary March 2017 jobless rate was 0.1 percentage points lower than the 5.1 percent rate recorded for the state in March 2016.

The U.S. seasonally adjusted jobless rate for March 2017 was 4.5 percent, according to the U.S. Department of Labor. Labor force statistics, including the unemployment rate, are based on estimates from the Current Population Survey of households. It is designed to measure trends rather than to count the actual number of people working. It includes jobs in agriculture and those classified as self-employed.

In a separate federal survey of business establishments that excludes jobs in agriculture and people who are self-employed, Kentucky’s seasonally adjusted nonfarm employment increased by 1,300 jobs in March 2017 compared to February 2017. Nonfarm data is provided by the Bureau of Labor Statistics’ Current Employment Statistics program. According to this survey, seven of Kentucky’s 11 major nonfarm North American Industry Classification System (NAICS) job sectors registered gains in employment, while four declined from the previous month.

The trade, transportation and utilities sector jumped by 1,600 jobs in March 2017. This is the largest sector in Kentucky with more than 400,000 jobs accounting for one-fifth of all nonfarm employment. Since March 2016, this sector has surged by 7,100 jobs or 1.8 percent.

The government sector, which includes public education, public administration agencies and state-owned hospitals, rose by 1,800 jobs in March 2017, but has declined by 1,200 positions since last March.

Information sector jobs increased by 200 in March 2017 and has risen by 1,300 jobs or 5.7 percent since March 2016. The industries in this sector include traditional publishing as well as software publishing; motion pictures and broadcasting; and telecommunications.

Employment in the other services sector, which includes repairs and maintenance, personal care services, and religious organizations, increased by 100 positions in March 2017 compared to the month before, and gained 1,200 positions since March 2016.

The mining and logging sector gained 100 jobs in March 2017. The industry has declined by 1,300 positions from a year ago.

The leisure and hospitality sector decreased by 500 jobs in March 2017. Since March 2016, the sector has added 100 jobs. This sector includes arts, entertainment, recreation, accommodation, and food services.

Kentucky’s professional and business services sector fell by 1,300 jobs in March 2017 from the month before but has added 6,800 since March 2016. This category includes establishments engaged in services that support the day-to-day activities of other organizations, including temporary employment services and payroll processing.

Learn more about the Office of Employment and Training at http://www.kylmi.ky.gov/. 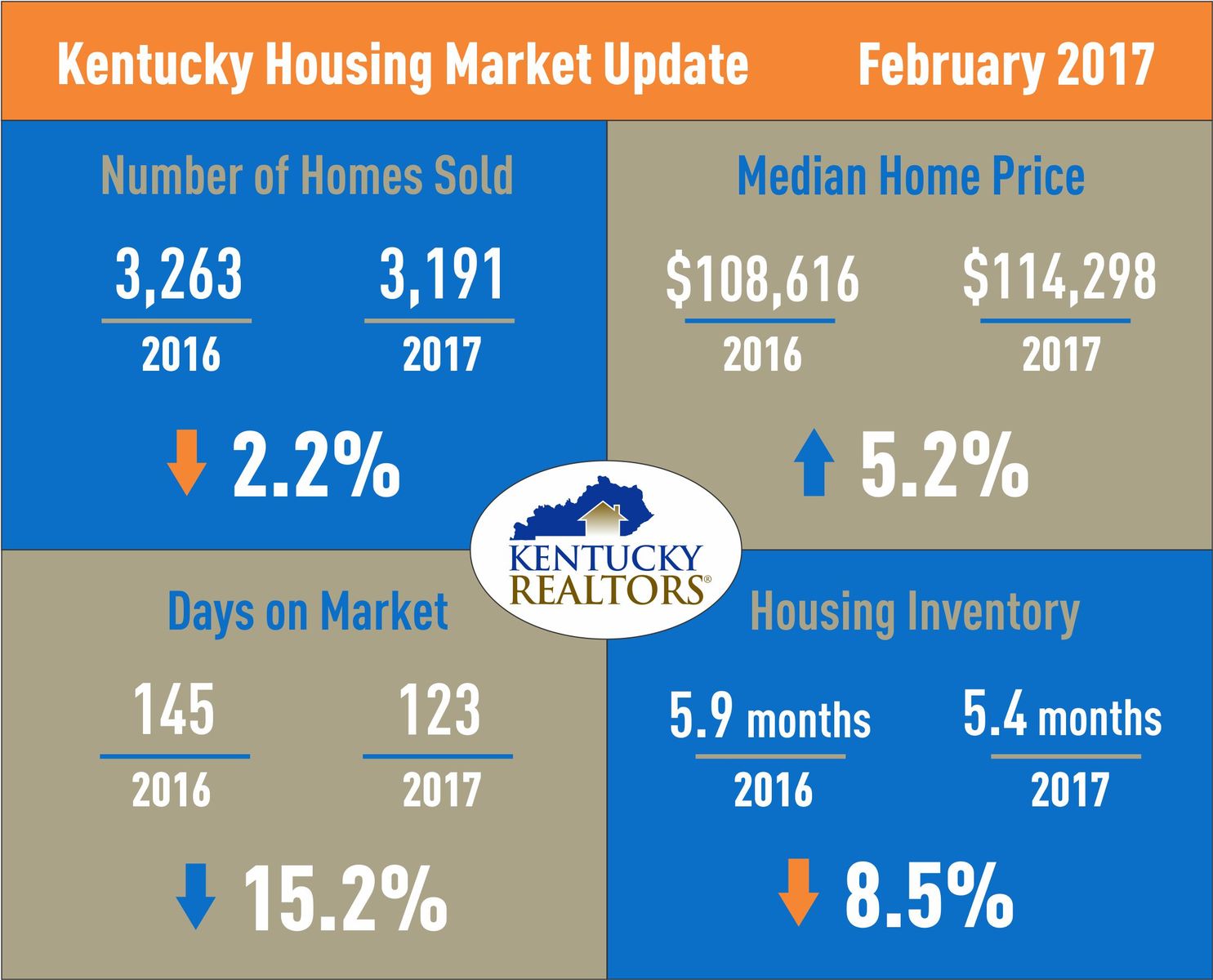 For the first time since the summer of 2015, Kentucky real estate saw a decrease in monthly, year over year, home sales. The 2.2 percent decline in February (3,191 in 2017 versus 3,263 in 2016) comes at a time when housing inventories are at historical lows. The median price, however, remained strong, increasing over 5 percent to $114,298.

“Last year, the market was really hot and properties moved quick. A single month’s drop in sales isn’t indicative of a slow-down,” said Mike Becker, president of Kentucky REALTORS®. “In fact, it’s still a seller’s market and the hope is that to meet buyer demand, new construction will ramp up this year to supplement existing home listings.”

Year to date, homes sales are up 7.8 percent and March figures are looking strong. At the current pace, 2017 is shaping up to be another record-setting year for Kentucky. Nationally, pending home sales are at the second-highest level in over a decade, showing that demand is rising and buyers are gearing up for the busy spring and summer months ahead.

According to Lawrence Yun, chief economist for the National Association of REALTORS®, “buyers came back in force (in February) to fuel an increase in contract signings throughout the country.” He added “the stock market's continued rise and steady hiring in most markets is spurring significant interest in buying, as well as the expectation from some households that delaying their home search may mean paying higher interest rates later this year."

For now, however, interest rates are holding in the low 4 percent range and have declined over the past month to the lowest levels of the year. Rates are still higher than they were a year ago and experts are saying they could increase by a half percent by the end of the year.

February’s inventory levels were down 8.5 percent to 5.4 months of supply compared to the same period a year earlier and days on market were down over 15 percent.

“It still remains that qualified buyers will have to decide quickly on a property if they see a home in their price range that meets their needs,” stated Becker. “And having financing in place before starting the home search process makes it easier to lock up a contract to purchase when a decision is made.”

Kentucky REALTORS® is one of the largest and most influential associations in Kentucky. Founded in 1922, Kentucky REALTORS® represents more than 10,300 REALTORS® who are involved in all aspects of real estate, including residential and commercial real estate brokers, sales agents, developers, builders, property managers, office managers, appraisers and auctioneers.

The Kentucky Real Estate Education Foundation (KREEF) is changing its name to the Kentucky REALTOR® Institute (KRI). Check out the website today to view the new logo and get more information about the name change. In addition, to the name change, a fresh, new website is in the works to better serve real estate professionals and those interested in getting started in a real estate career.

KRI provides a comprehensive selection of education including classroom CE, online CE, designation courses, pre- and post-licensing and GRI programming to meet the needs of every student. Call today to see what we have to offer or just check the website (the new address is kyrealtorinstitute.com).

The selection of online offerings has recently expanded to include video-based courses to cover both CE, post-licensing (PLE) and GRI credit. The Keynote series of online courses feature the top instructors from across the country at a very affordable cost. Some courses also include ethics credit which is now required every two years (the current cycle is 2017 – 2018).

A big change going forward is the GRI program (GRI 100 – 600) covers all the required PLE hours. To help new licensees gain these hours, KRI has made an effort to expand the number of GRI courses being offered and increase the number of locations where the courses are held. This year, the number of GRI courses being offered is the most in the history of the program. If you want to start the coursework to earn the most popular national designation in real estate, there has never been a better time than now. Also, if you already have the GRI designation, but want to retake a course for all the updates and to earn CE credit, a discount is offered to allow you to audit the courses you want.

And finally, KRI makes available several scholarships to help assist with costs associated with education. There are three types – GRI, college/post-secondary education and pre-licensing. To apply, click here and download the application and learn more about what each scholarship covers.

The unemployment rate declined to 4.5 percent in March, and total nonfarm payroll employment edged up by 98,000, the U.S. Bureau of Labor Statistics reported today. Employment increased in professional and business services and in mining, while retail trade lost jobs.

The unemployment rate decreased by 0.2 percentage point to 4.5 percent in March, and the number of unemployed persons declined by 326,000 to 7.2 million. Both measures were down over the year.

The number of persons employed part time for economic reasons (sometimes referred to as involuntary part-time workers), at 5.6 million, was little changed in March but was down by 567,000 over the year. These individuals, who would have preferred full-time employment, were working part time because their hours had been cut back or because they were unable to find full-time jobs.

In March, 1.6 million persons were marginally attached to the labor force, little changed from a year earlier.

(The data are not seasonally adjusted.) These individuals were not in the labor force, wanted and were available for work, and had looked for a job sometime in the prior 12 months. They were not counted as unemployed because they had not searched for work in the 4 weeks preceding the survey.

Among the marginally attached, there were 460,000 discouraged workers in March, down by 125,000 from a year earlier. (The data are not seasonally adjusted.) Discouraged workers are persons not currently looking for work because they believe no jobs are available for them. The remaining 1.1 million persons marginally attached to the labor force in March had not searched for work for reasons such as school attendance or family responsibilities.

Though it came neither fast nor easy, Kentucky’s residential real estate sector has recovered from the steep losses of the Great Recession, and the past two years is breaking new ground for sales, according to recent numbers by the Kentucky Association of Realtors.

After a record-breaking 2015, 2016 achieved the distinction of the highest number of total home sales ever recorded in the state, at 52,123. Prices are rising and days on the market are shrinking as inventory decreases.