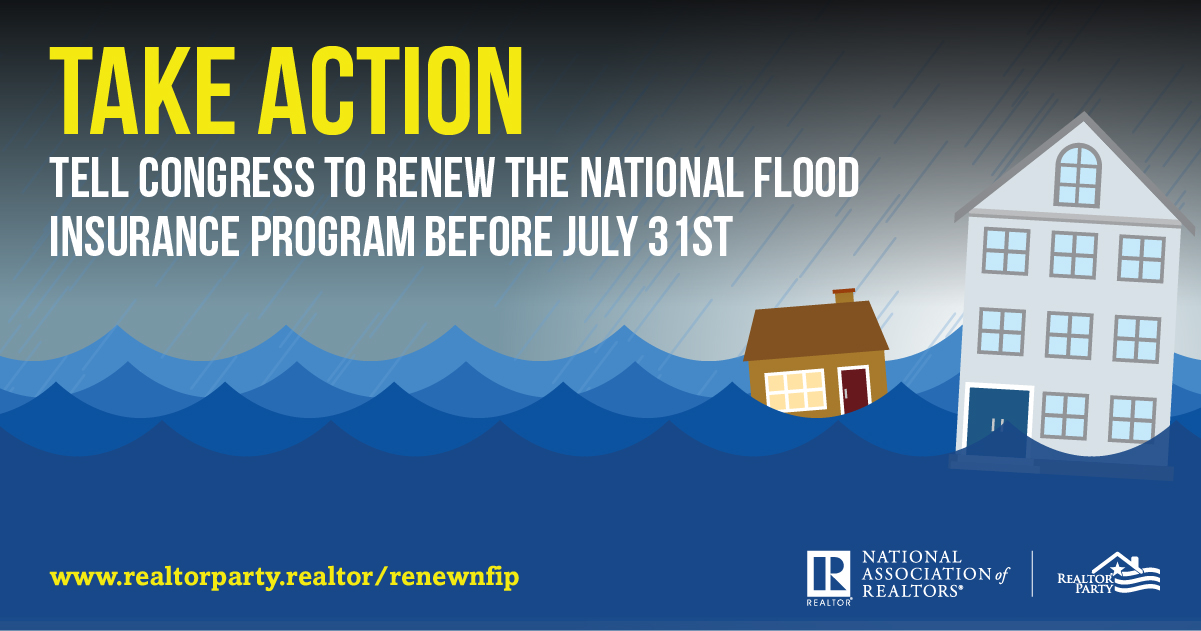 The National Flood Insurance Program (NFIP) will expire on July 31, denying necessary insurance coverage to homeowners and buyers in more than 20,000 communities nationwide. Congress must act now to reform and extend the NFIP.

As the leading advocate for private property rights and housing issues, NAR supports long-term reauthorization and reform of the National Flood Insurance Program before it expires on July 31.

America’s 1.3 million REALTORS value the NFIP as a critical tool to help protect homeowners and ensure access to affordable flood insurance. In fact, as flood insurance is required for a mortgage across 22,000 communities in America, a prolonged lapse in authority could jeopardize the sale of up to 40,000 homes per month in the United States.

While every day brings us closer to NFIP expiration, the urgency of its reauthorization is not new to Congress or anyone reliant upon the flood insurance program.

KYR is offering the chance to win a FREE registration to the KYR Annual Convention in Louisville this September, valued at $139. Any member who participates in this CFA will automatically be entered to win, and the winner’s name will be drawn at random at the conclusion of the CFA. Also, you can help your board win too. KYR is offering $100 gift cards in each of the board categories (small, medium, and large) with the greatest member participation in the CFA.

Flood insurance isn’t just for coastal properties - inland areas flood, too. And if the NFIP lapses, up to 40,000 transactions per month could be affected.

The National Association of REALTORS® supports several revisions to the program:

In addition to participating  in the Call for Action, we are asking for your help in promoting this to other members. 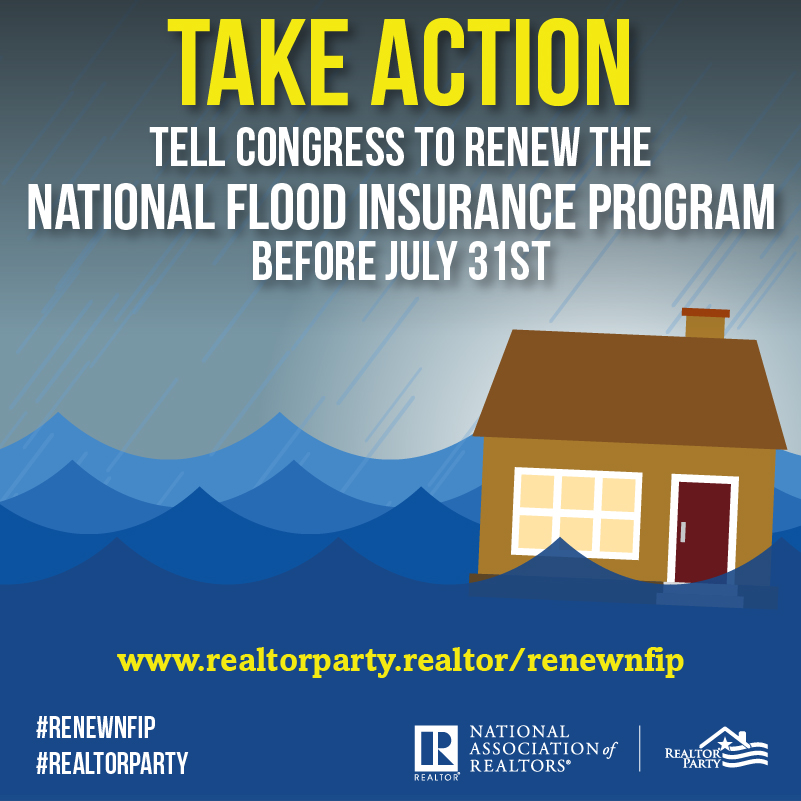 April's volume is the highest ever for the month 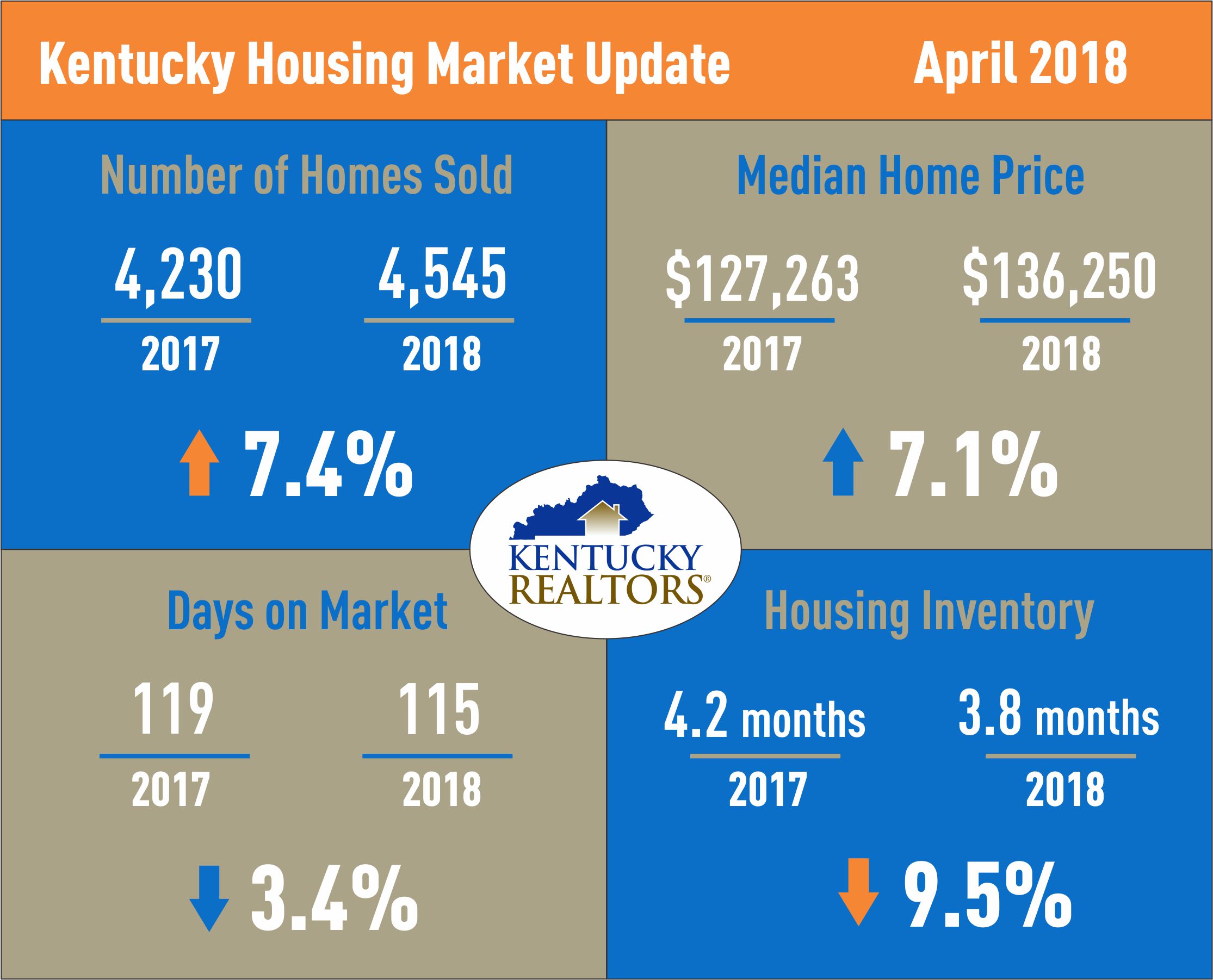 In a reversal of course and going against the national trend, Kentucky’s housing sales were up in April for the first time in 2018 and the first increase since October 2017.

Real estate sales reached 4,545, which is a 7.4 percent increase over April 2017 and an all-time high for the month. Year-to-date, homes sold are still down less than 1 percent over last year with only 79 less transactions in the first four months of 2018 compared to the same period in 2017.

“We are now in the prime home buying and selling season,” said Steve Cline, 2018 president of Kentucky REALTORS®. “In fact, April was the first increase in sales the state has seen since October 2017. Inventory issues have really limited the ability for buyers to make a move, but pent up demand seems to be driving the market. This month showed a significant decrease in days on market and inventory which means homes aren’t staying on the market very long. The next few months will provide a better outlook on where Kentucky may land for the year in real estate.”

Going into the busy real estate period, days on market dropped 3.4 percent to 115 days in April from 119 last year and down from 120 days in March. Inventory across the state fell almost 10 percent from a year ago, with only 3.8 months of inventory on hand. There was a slight decline in housing inventory to this point in the year, with 3.8 months of supply for March, a decrease of 5 percent over last year and down 2.1 percent to 4.7 months, for the quarter. Year-to-date, days on market is down 4 percent compared to 2017 and inventory is down 3.6 percent, reaching 4.57 months overall.

Nationally, home sales slid 1.4 percent in April, but home prices were up 5.3 percent over a year ago. Properties typically stayed on the market for 26 days in April, which is down from 30 days from two months ago and 29 days a year ago. Fifty-seven percent of homes sold in April were on the market for less than a month. Total housing inventory at the end of April increased 9.8 percent, but is still 6.3 percent lower than a year ago.

Lawrence Yun, NAR chief economist, says that the homes available for sale are going under contract at a rapid pace. Since NAR began tracking this data in May 2011, the median days a listing was on the market was at an all-time low in April, and the share of homes sold in less than a month was at an all-time high. 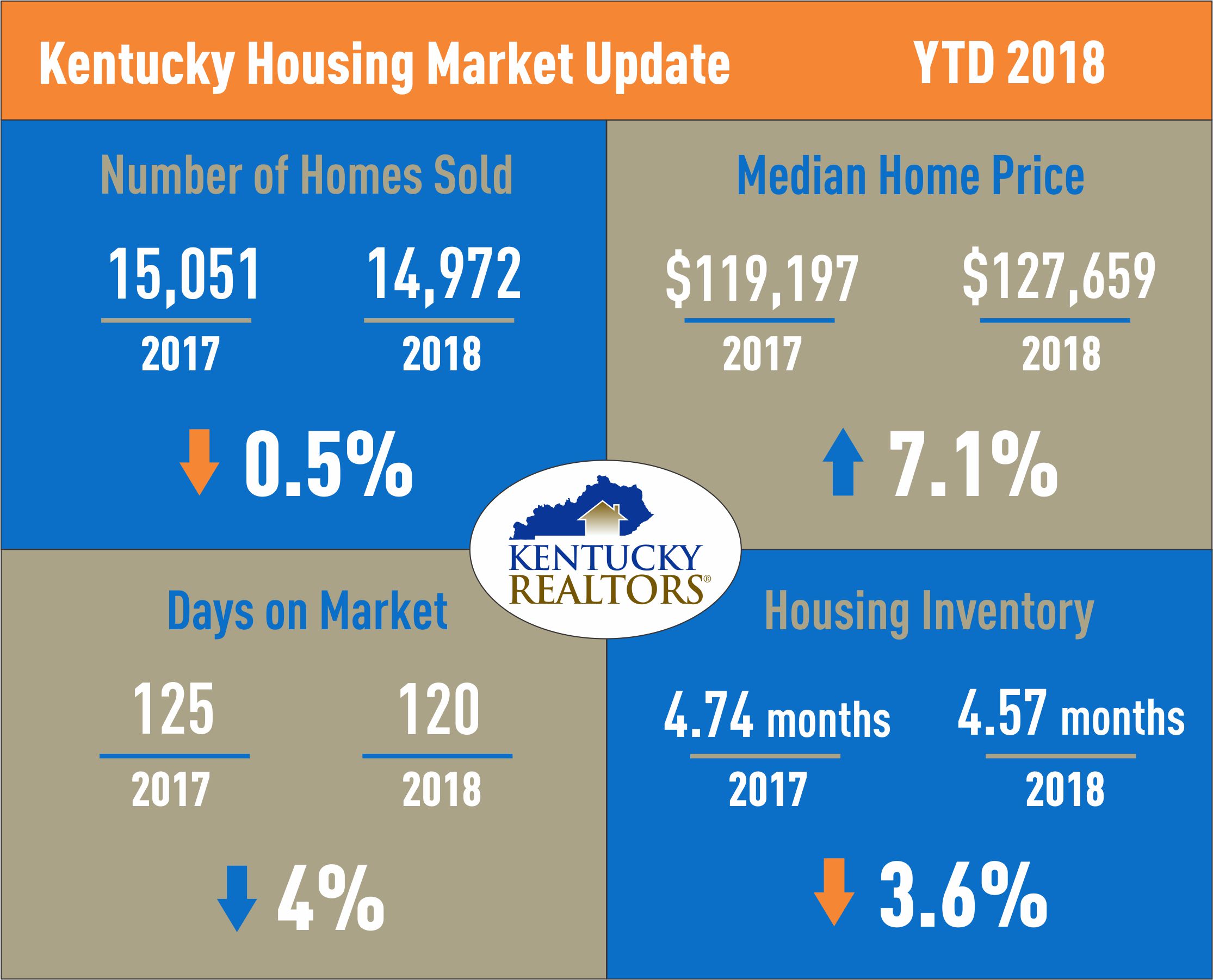 Prices in Kentucky rose 7 percent year over year, reaching a median of $136,250 in April, making it the highest ever recorded for that month and the third highest median price ever in Kentucky. April’s median price was 3 percent higher than the previous month in March. Year to date, the median home price of $127,659 is 7 percent higher than it was at this time in 2017, putting it on pace to break another annual record. Total sales volume was another April record, reaching over $880 million, an increase of more than 14.6 percent over the $768 million sold in April 2016, the previous record for the month.

“Throughout the state, the housing market is still very hot as more and more people are wanting to take advantage of Kentucky’s affordable housing prices while interest rates are still low,” said Cline. “The national picture shows a cooling off of pending sales, but the south, which includes Kentucky, is still higher now than it was this time last year. From what I am seeing across the state, demand for homeownership is very robust and will continue that trend for some time.”