The economic impact of Kentucky’s tourism industry has grown to more than $15 billion in 2017, Department of Tourism Commissioner Kristen Branscum announced recently. All nine of the state’s tourism regions registered gains again in 2017.

“The tourism industry is a driving force for Kentucky’s economy and the 2017 economic impact numbers reinforce this,” Branscum said. “We look at growth in our state in terms of investment and the impact numbers prove that visitors are investing their money and time into Kentucky.”

Kentucky’s tourism industry generated over $15 billion in economic impact during 2017, an increase of 3.8 percent over the previous year. The industry also supported over 195,000 jobs. Kentucky tourism generated more than $1.5 billion in tax revenue, with $202 million going directly to local communities.

The Kentucky Department of Tourism continues to build upon Kentucky’s signature tourism industries of horses, bourbon, music, arts, outdoors and culinary to reach new audiences and position Kentucky as a top-tier travel destination for visitors internationally and domestically.

LACK OF INVENTORY CONTINUES TO IMPACT THE MARKET 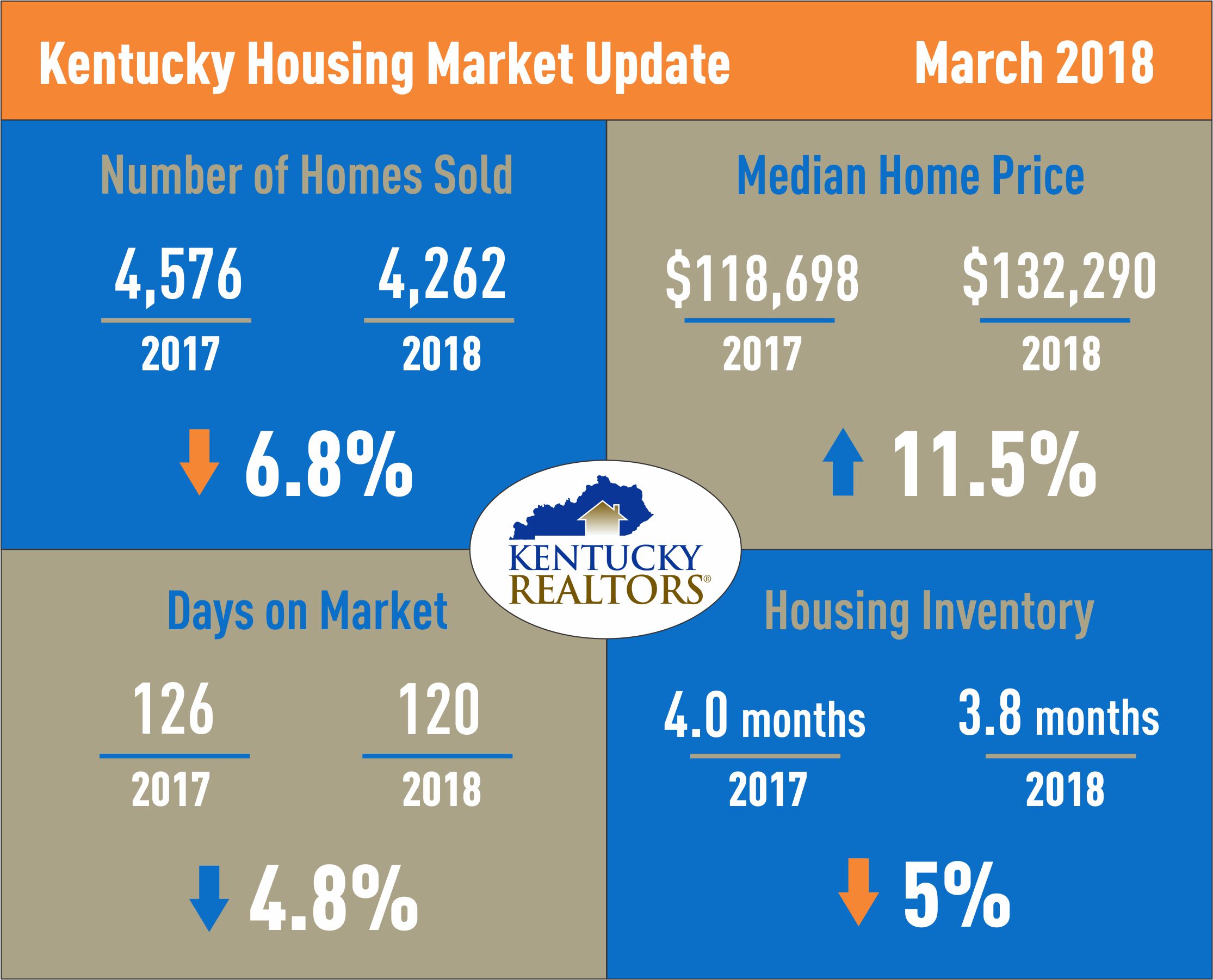 “The housing market is still really strong,” said Steve Cline, 2018 president of Kentucky REALTORS® (KYR). “Last year was a record breaking year in homes sold and home prices. This year, we had to endure unseasonably cold weather through the latter part of the quarter, which may have negatively affected the market. The spring and early summer months will be telling as to how the rest of 2018 will look.”

Lawrence Yun, NAR chief economist, says that while the healthy economy is generating sustained interest in buying a home this spring, sales are lagging levels from one year ago due to low supply and home prices keep climbing above what some would-be buyers can afford. On the national level, median home prices are north of $250,000, however, that is not the case in Kentucky. 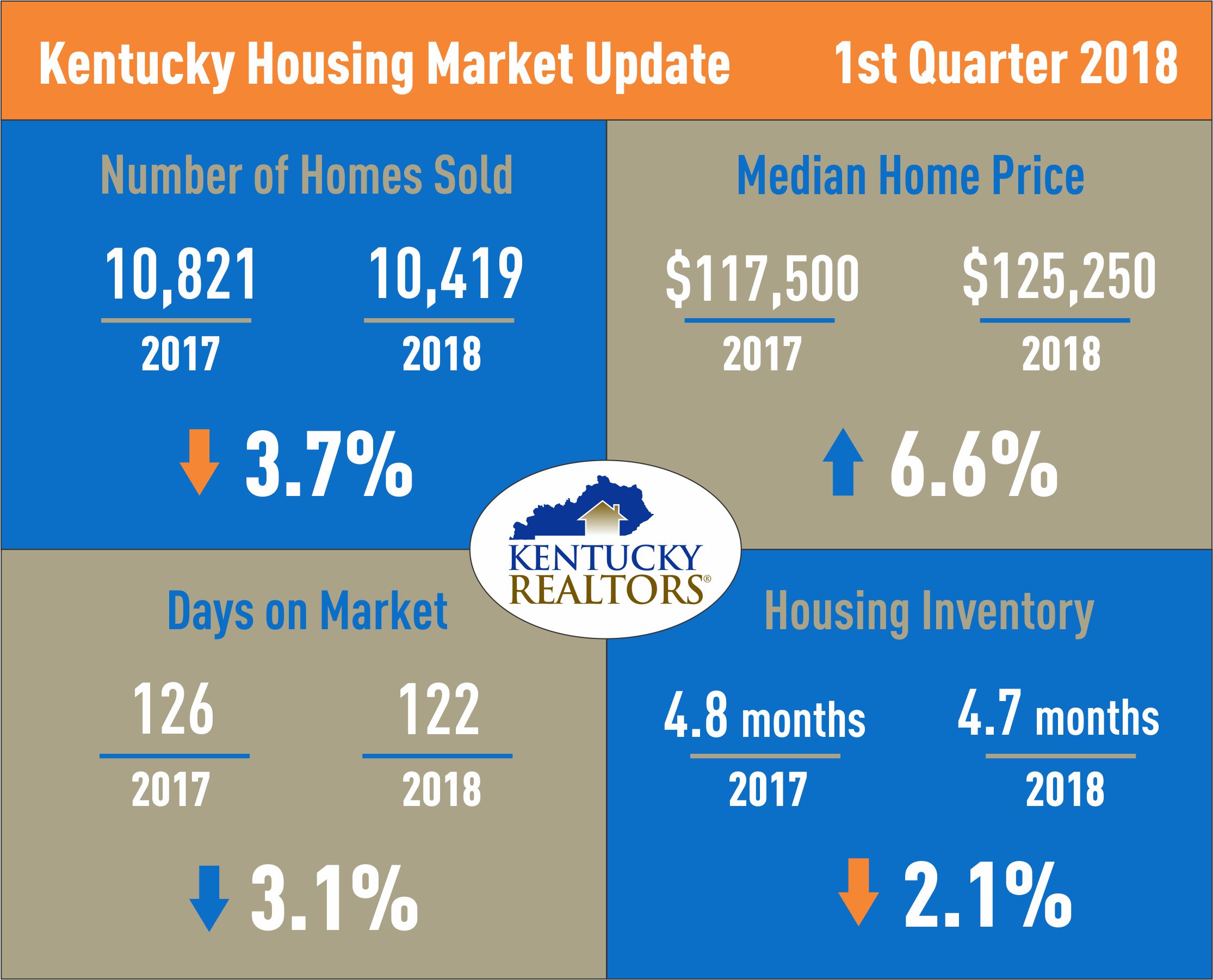 The months ahead are traditionally the peak for home sales and Kentucky has seen a slight decline in housing inventory to this point in the year, with 3.8 months of supply for March - a decrease of 5 percent over last year and down 2.1 percent, to 4.7 months, for the quarter.

Because of the tight supply, days on market also saw a decline, falling to 120 days in March which is down 4.8 percent over last March. For the quarter, homes closed 4 days faster, hitting 122 days in 2018.

“I’m optimistic about the real estate market because we have a strong economy,” said Cline. “We are at a place where both state and national unemployment is near record lows and the environment is stable for home purchases. Certainly, we could use more inventory to meet demand as activity is picking up with the warmer weather, but overall it should be another strong year.”

Nationally, the momentum is swinging toward home ownership. In 2017, the homeownership rate rose for the first time in 13 years and the first quarter of 2018 marked the fifth consecutive quarter where the homeownership rate rose from the prior year, jumping almost 1 percent to 64.3 percent. This is being caused by a variety of factors. Not only is the economy strong, loosening credit standards, rising rents, continued low mortgage rates and a demographic shift where the large millennial generation is entering its prime home buying stage are contributing factors.

“In order to keep buyers in the market, and home prices affordable, we need a healthy supply of homes to meet the demand,” said Cline. “To do this, home construction will need to steadily increase and sellers who want to move up will need to list their properties. As this continues to happen, we should see a more balanced market going forward.”