Landlords now held liable when a tenant’s dog bites someone would receive some relief under a bill that advanced today in the Kentucky House.

House Bill 112, sponsored by Rep. Stan Lee, R-Lexington, would effectively remove landlords from liability for their tenants’ dogs under the state’s dog bite laws by redefining a dog owner as someone who both keeps and cares for a dog on property that the person both occupies and owns or leases. Current law does not specifically include tenants under the definition of dog owner.

Lee said the bill, which passed the House by a vote of 87-9, would give landlords the same protection they enjoyed under Kentucky’s dog bite laws prior to 2012 when the Kentucky Supreme Court ruled in the case of Benningfield v. Zinsmeister. The landlord in that case was found responsible “despite the fact that landlord had made an effort to go to his leased tenant and say ‘please remove that dog,’” said Lee.

Rep. Jeff Greer, D-Brandenburg, an insurance agent, said he supports HB 112. Greer said he has had clients who own rental property struggle with the current law even in cases where tenants agreed in writing that they would not have a dog.

“If they get a dog later, what bothers me is my insureds … are held accountable. I don’t think that’s fair,” he said.

Among those voting against the bill was Rep. Angie Hatton, D-Whitesburg. Hatton said there is no protection for dog bite victims under the legislation.

“If six pit bulls were trained to kill and let run loose by a tenant, there’s no liability. There’s no protection under this legislation for any person who’s injured by a dog…” she said.

HB 112 now goes to the Senate for its consideration. 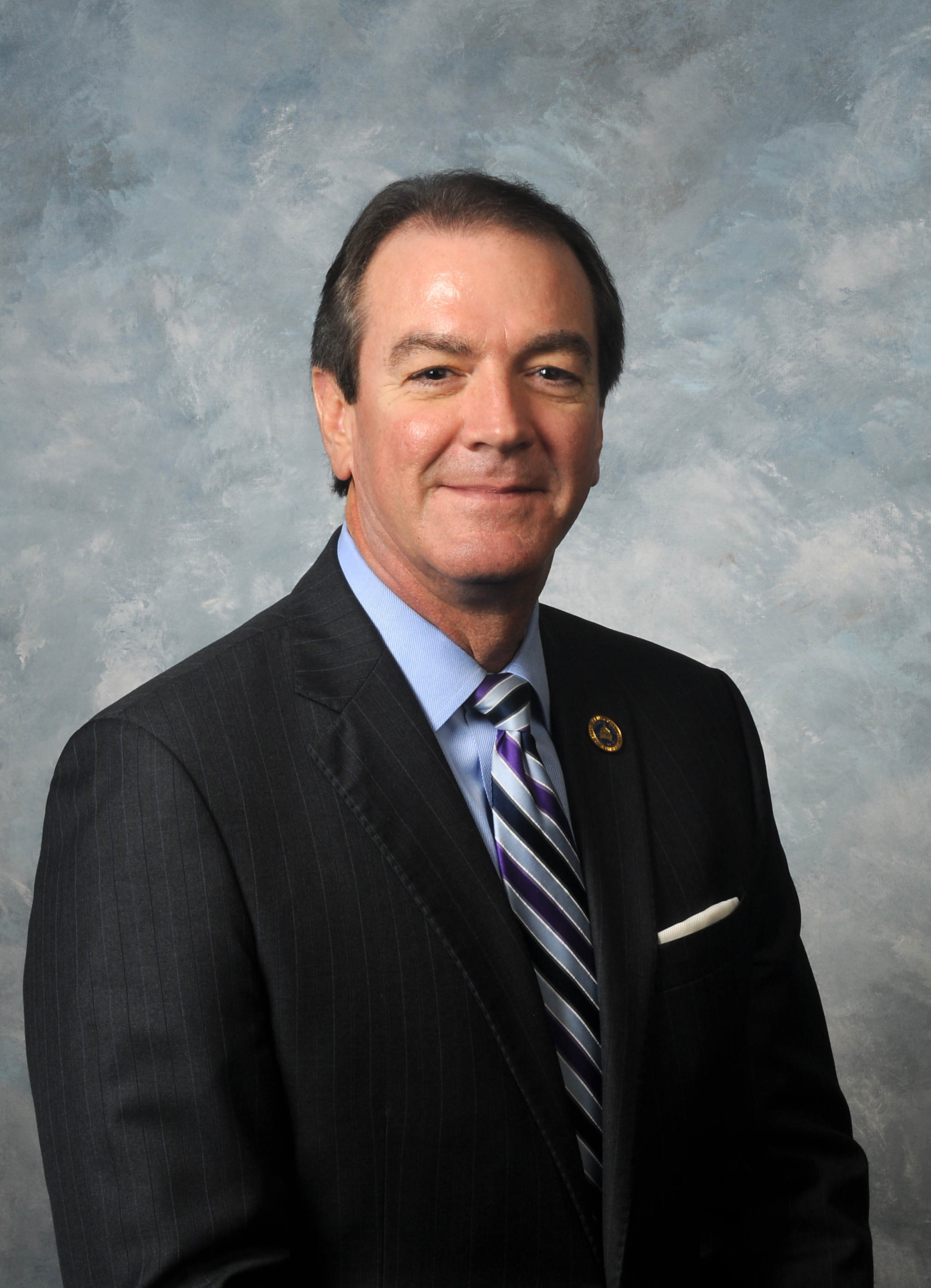 The Kentucky REALTORS® recently awarded the Jess and Carolyn Kinman Award to Representative David Osborne of Prospect. Representative Osborne is a true champion of the real estate industry, lending his support to HB 149 in 2015 that increased education for new real estate licensees which promotes a higher level of professionalism in the industry. In the past, he co-sponsored HB 533 that prohibited private transfer fees in real estate transactions and, in 2009, supported the Small Business Tax Credit and New Home Tax Credit to help slow the decline of the housing market during the Great Recession.

“It is a great honor to have been selected by my fellow REALTORS® for this prestigious award,” stated Osborne. “Jess Kinman was a wonderful individual who made tremendous contributions to the real estate profession. To receive an award in his memory is indeed humbling.”

Representative Osborne, serving District 59 which includes part of Oldham County, is a REALTOR® with Barry Smith Realty in Shelbyville and serves the House as Speaker Pro-Tempore. His civic engagements include Oldham County Chamber of Commerce, Kentucky Equine Education Project (KEEP) and the Thoroughbred Club of America. He graduated from the University of Kentucky with a Bachelor’s of Science degree.

As part of the award, First Federal Savings Bank of Frankfort makes a charitable donation in the name of the award recipient. This year, Representative Osborne selected the Hope Health Clinic in LaGrange, Kentucky.

The award is named in honor of Jess, a former Kentucky REALTORS® president and REALTOR® of the Year who passed away in 2007, and his wife Carolyn, who worked for many years at the Legislative Research Commission and General Assembly.

The Kinman Award is presented to an outstanding Kentuckian whose involvement in the legislative and political arenas have left an indelible mark on all those who have known or worked with him or her.

Inventory could be an issue in 2017 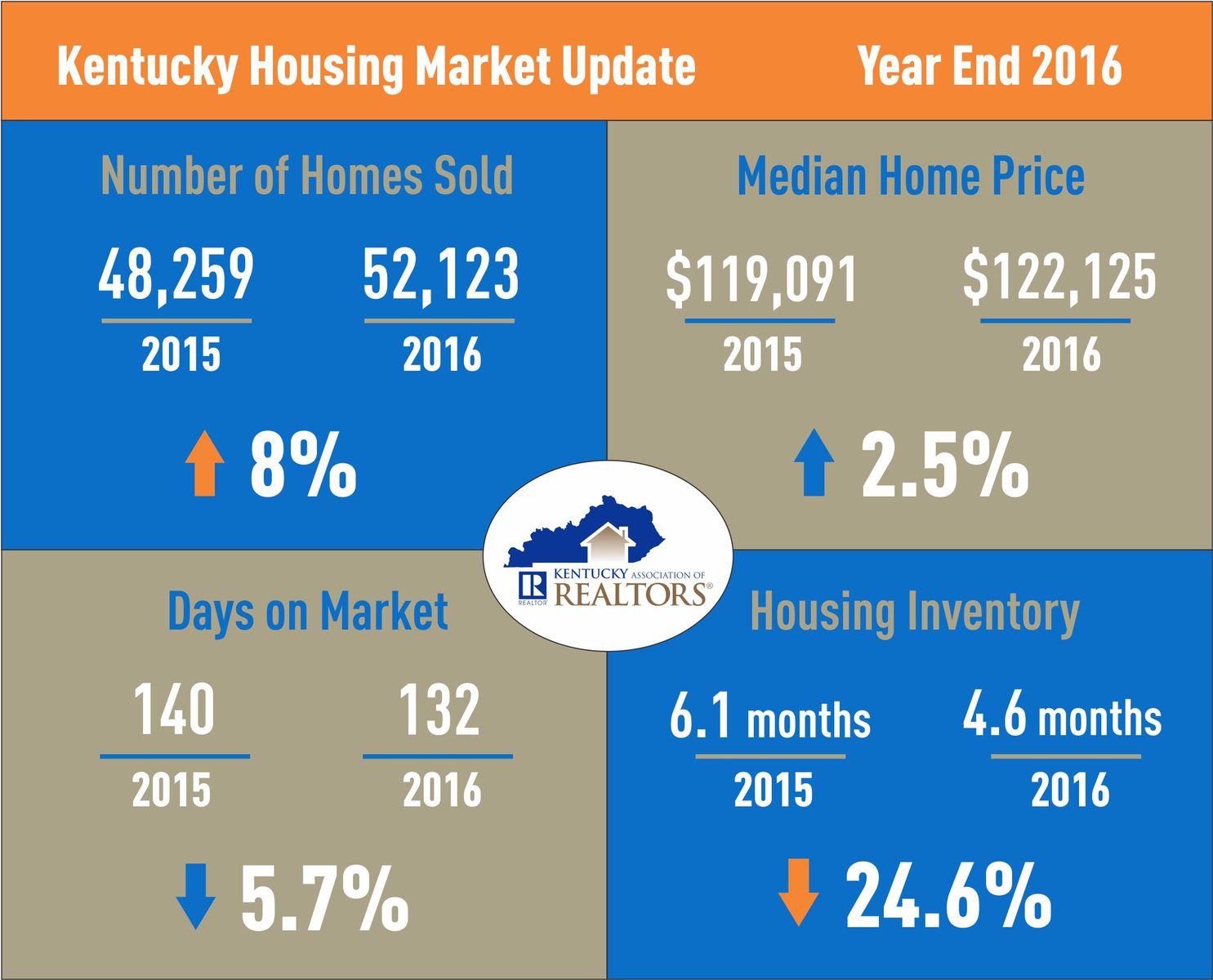 After a record breaking year in 2015, Kentucky’s number of homes sold set new highs in 2016. Total home sales were the highest ever recorded in the state at 52,123, an 8 percent increase over the 48,259 sold in 2015. The Kentucky Association of REALTORS® (KAR) reported that over the past five years, home sales increased monthly, year-over-year, in all but seven months.

Home prices in the state increased to a median of $122,125 for the year, the highest annual median price recorded in the state, exceeding the record of $119,091 for 2015 by 2.5 percent. Even with back to back record years, the increase in price for Kentucky was far below (just over 55 percent) the national median home price of $221,500. In December, Kentucky’s median home price climbed to $120,910, another record for the state. 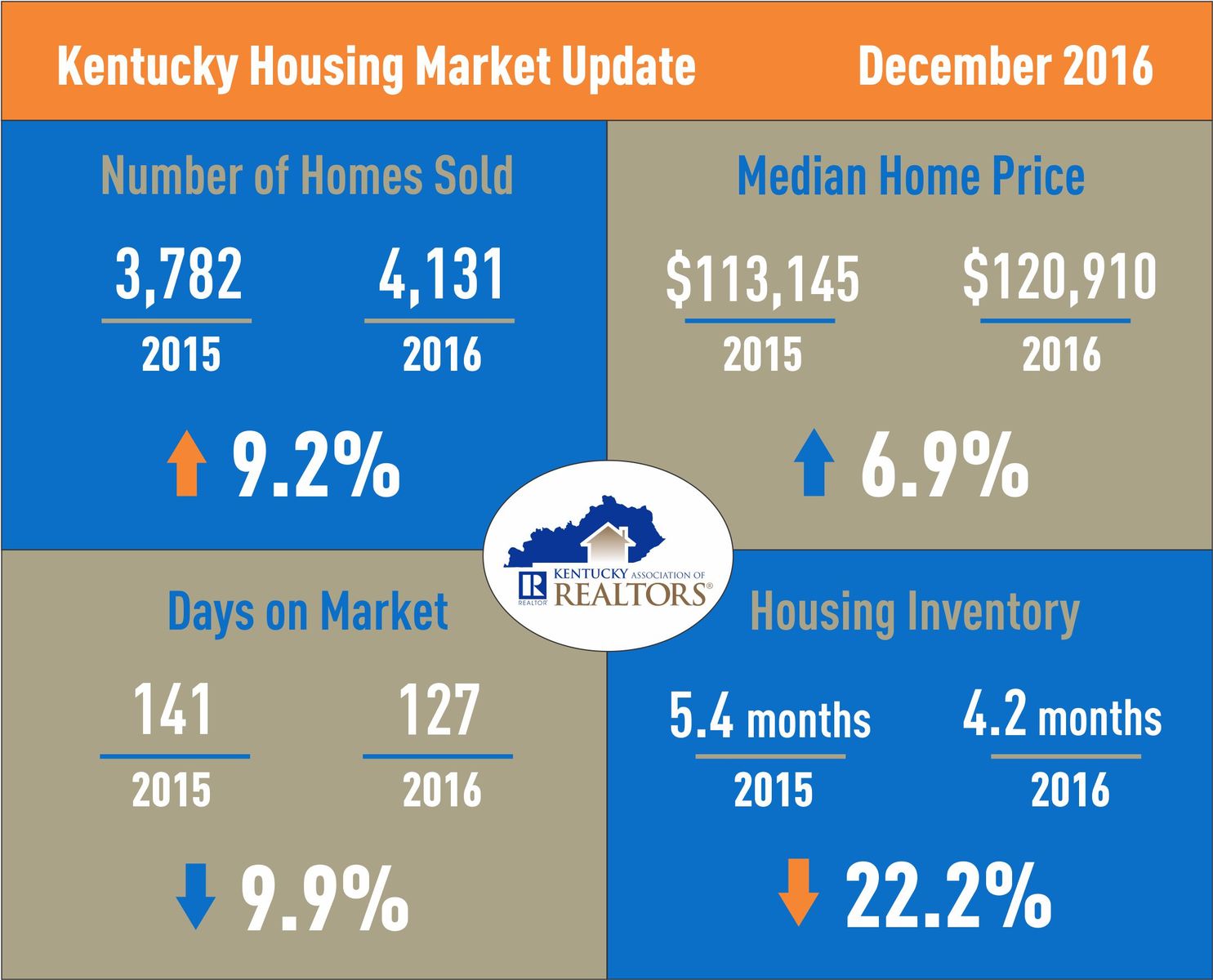 Total volume of all homes sold in Kentucky broke the $9 billion mark for the first time with $9.17 billion in sales. This surpasses the $8.21 billion sold in 2015.

“2016 was a unique year for real estate in Kentucky,” stated Mike Becker, 2017 president of KAR. “Low inventory was an issue in just about every region of the state, but with low interest rates and a continuous demand from qualified buyers, homes didn’t stay on the market long if they were priced appropriately.”

At the end of the year, housing inventory across Kentucky was down 25 percent from 2015. Having 4.6 months of inventory to close out 2016 (compared to 6.1 months in 2015) puts the state into what is characteristically a seller’s market, but consumers are seeing affordable prices on the buying side. Days on market (DOM), an indicator that shows housing demand, dipped 5.7 percent to 131.9 days in 2016. In larger metro areas in Kentucky such as Lexington and Louisville, days on market are down into the range of two to three months.

Even though official figures aren’t yet available for 2017, local associations across Kentucky are remaining optimistic for another banner year. Reports are showing a strong economy, lower unemployment rates and the federal interest rate was left unchanged at its last meeting.

“Kentucky’s economy remains stable and that is always a good thing for real estate,” says Becker. “Our low cost of living compared to most of the country and the momentum carried over from an active 2016 is the foundation needed to sustain a healthy real estate market throughout the year.”

On the national level, as it was echoed throughout many Kentucky regions, inventory is the biggest variable on how 2017 shapes up for real estate. New construction seems to be the main factor related to inventory. Lawrence Yun, chief economist for the National Association of REALTORS® (NAR) said, “Housing options for both buying and renting remains a pressing concern because of another year of insufficient home construction. Given current population and economic growth trends, housing starts should be in the range of 1.5 million to 1.6 million completions and not stuck at recessionary levels. More needs to be done to address the regulatory and cost burdens preventing builders from ramping up production.” In fact, nationally, total housing inventory was at the lowest level since NAR began tracking the supply 18 years ago.

“We are at a time where, in most areas, well priced homes are moving fast due to low inventories. It has become a low supply versus high demand issue and buyers who want to get in the market have to move quickly to secure a home,” continued Becker. “Boosting home construction should give buyers more options and help sellers feel more comfortable putting their homes on the market. Home building may ramp up going forward but if you need to sell now, the market seems primed.”

The Kentucky Association of REALTORS® is one of the largest and most influential associations in Kentucky. Founded in 1922, KAR represents more than 10,300 REALTORS® who are involved in all aspects of real estate, including residential and commercial real estate brokers, sales agents, developers, builders, property managers, office managers, appraisers and auctioneers.

To view housing statistics for the state, as reported to KAR, visit housingstats.kar.com.

The Kentucky Economic Development Finance Authority has given preliminary approval to Amazon to invest $1.494 billion in a centralized hub at the Cincinnati/Northern Kentucky International Airport that could eventually create more than 2,700 jobs.

The $1.494 billion investment is believed to be the largest project in state history.

The hub, which would be located in a new facility, would serve Amazon’s growing fleet of Prime Air cargo planes.

Amazon has been approved for $40 million in tax incentives over 10 years.