Woodford County recorded the lowest jobless rate in the Commonwealth at 3.5 percent. It was followed by Shelby County, 3.8 percent; Campbell, Fayette, Monroe, Oldham and Scott counties, 3.9 percent each; Jessamine County, 4 percent; and Boone, Kenton and Spencer counties, 4.1 percent each.

Kentucky’s county unemployment rates and employment levels are not seasonally adjusted because of small sample sizes. Employment statistics undergo sharp fluctuations due to seasonal events such as weather changes, harvests, holidays and school openings and closings. Seasonal adjustments eliminate these influences and make it easier to observe statistical trends. The comparable, unadjusted unemployment rate for the state was 5.2 percent for August 2017, and 4.5 percent for the nation.

Unemployment statistics are based on estimates and are compiled to measure trends rather than actually to count people working. Civilian labor force statistics include non-military workers and unemployed Kentuckians who are actively seeking work. They do not include unemployed Kentuckians who have not looked for employment within the past four weeks. The data should only be compared to the same month in previous years.

Second half of the year off to a solid start 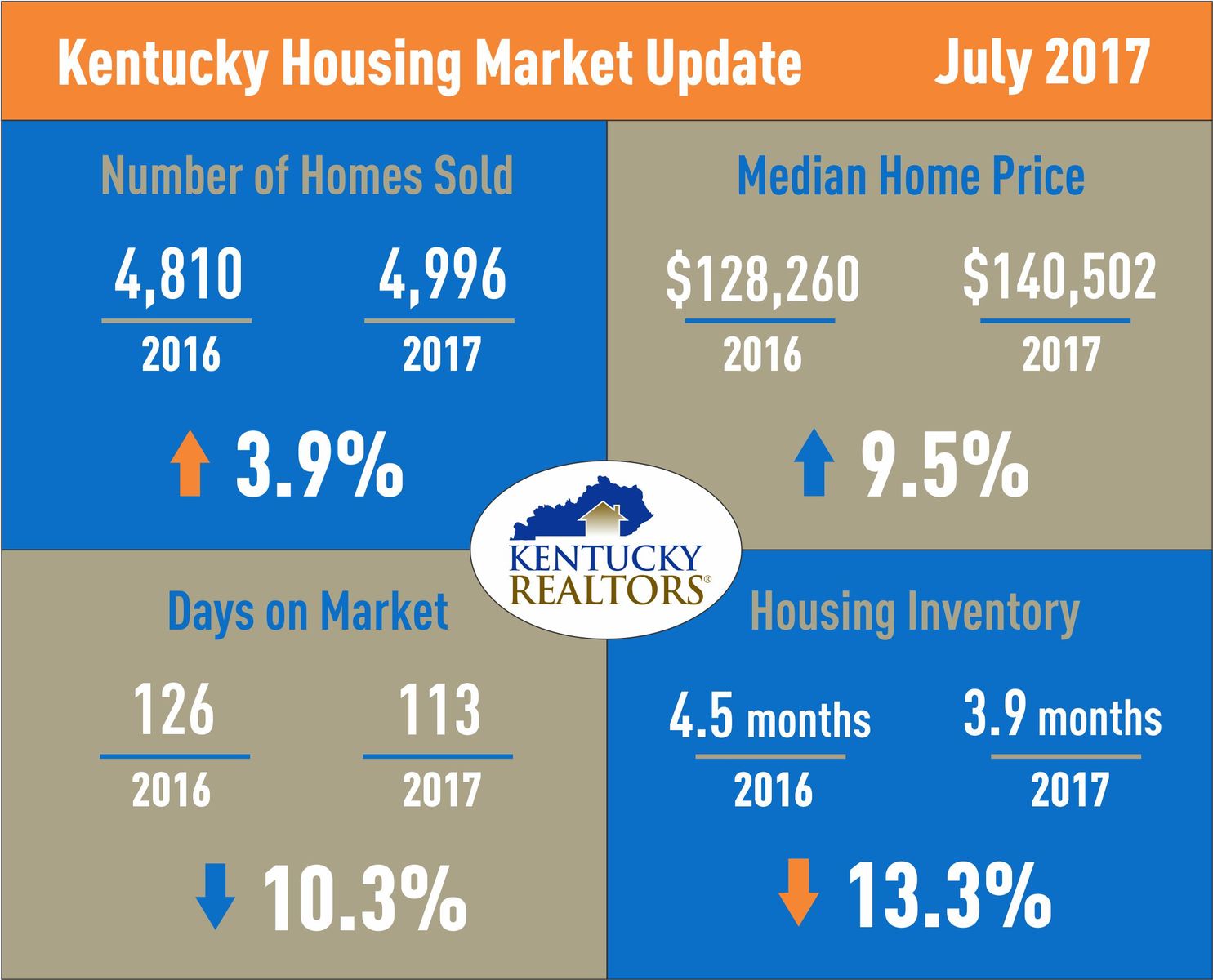 Real estate sales in Kentucky continued to increase after a strong first half of the year. Total home sales in July hit 4,996 for a 3.9 percent increase over the same month in 2016. Year to date, home sales hit 30,939 versus 29,596 in 2016, an increase of 4.5 percent. These improvements in the market come at a time when housing inventories across the state dropped to under 4 months in July, a decrease of 13 percent from a year prior. For the year, inventory levels have declined almost 17 percent versus the same time in 2016.

“Buyer interest has held up through the strongest home buying months,” said Mike Becker, president of Kentucky REALTORS®. “The limited housing inventory would seem to be a concern, but from what we are seeing in most places across the state, home sales continue to be robust.”

New home sales, which are viewed as a market stimulator, took a dip in July falling 9.4 percent from the month prior. Year to date, however, new home sales are 9.2 percent above where they were for the same period last year. According to the National Association of Home Builders, some pull back in new home sales in July is not surprising after strong May and June readings.

“The housing market in Kentucky has been left unshaken so far this year with home sales above where they were at the same time last year,” stated Becker. “Affordability within the state continues despite a less than ideal inventory of available homes. This is helped by mortgage rates that are still hovering around record lows despite an uptick in the national funds rate. Qualified buyers have more purchasing power and can afford more house when the rates are favorable.”

Kentucky REALTORS® is one of the largest and most influential associations in Kentucky. Founded in 1922, Kentucky REALTORS® represents more than 10,600 REALTORS® who are involved in all aspects of real estate, including residential and commercial real estate brokers, sales agents, developers, builders, property managers, office managers, appraisers and auctioneers.

On August 18, 2017, both Freddie Mac and Fannie Mae, collectively the Government Sponsored Entities (GSEs), announced they would allow for the use of their proprietary automated valuation tools in lieu of traditional appraisals for some purchase loan transactions.

Freddie Mac will utilize their automated collateral evaluation (ACE) to determine home value by using data from multiple listing services and public records as well as their own data of historical home values to determine collateral risks. Homes must have an 80% or lower loan to value, be a one unit single-family residence, and the borrower’s primary residence. Prior appraisals on the property are not required. Lenders will find out if a property is eligible for ACE by submitting the loan data through Freddie Mac's Loan Product Advisor®. Freddie Mac does not have an estimate for how many loans will be affected. ACE will be available for qualifying home purchase loans on September 1, 2017.

Fannie Mae will allow lenders to receive a Property Inspection Waiver (PIW) on certain one-unit principal residence and second home purchase transactions with loan to value ratios up to 80%. Home value is determined through Fannie Mae's data based valuation methods. Unlike Freddie Mac, Fannie Mae will require that the property in question have a prior appraisal in electronic format that has been analyzed by Fannie Mae's Collateral Underwriter®. Lenders must submit the loan data through Fannie Mae's Desktop Underwriter®. Fannie Mae anticipates no more than 5% of loans will be affected, but that could change in the future. PIWs for purchase loans are available immediately.

On July 7, 2017, the Consumer Financial Protection Bureau (CFPB) released the final rule amending the “Know Before You Owe” (KBYO or TRID) mortgage disclosure rule. As advocated for by NAR, the final rule clarifies the ability to share the Closing Disclosure (CD) with third parties - a victory for real estate professionals nationwide.

As outlined in the 2016 proposed rule, the final rule highlights an existing exception within the Gramm-Leach-Bliley Act (GLBA) and implementing Regulation P that allows lenders to share the CD with third parties (sections 502(e)(1) and 509(7)(A)). The CFPB recognizes the CD as a “record of the transaction,” which is “informative to real estate agents and others representing both the consumer credit and real estate portions of residential real estate sales transactions.” The CFPB notes that CD sharing is permissible to the extent it is consistent with GLBA and Regulation P and is not barred by applicable State law.

The final rule was published in the Federal Register on August 11, making it effective on October 10, 2017. Mandatory compliance is required by October 1, 2018.

The preliminary August 2017 jobless rate was up 0.4 percentage points from the 5.0 percent rate recorded for the state in August 2016.

The U.S. seasonally adjusted jobless rate for August 2017 was 4.4 percent, according to the U.S. Department of Labor. The U.S. unemployment rate for August was up 0.1 percentage points from the 4.3 percent reported for July 2017.

Labor force statistics, including the unemployment rate, are based on estimates from the Current Population Survey of households. It is designed to measure trends rather than to count the actual number of people working. It includes jobs in agriculture and those classified as self-employed. 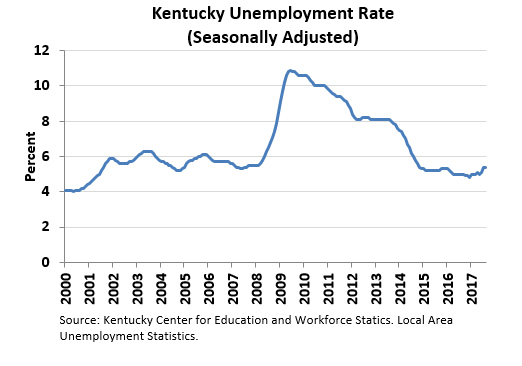 In a separate federal survey of business establishments that excludes jobs in agriculture and people who are self-employed, Kentucky’s seasonally adjusted nonfarm employment increased by 8,300 jobs in August 2017 compared to July 2017. Kentucky has added 30,500 jobs since August 2016, a 1.6 percent employment growth.

“Kentucky’s unemployment rate is holding at relatively low levels and nonfarm payrolls continue to show good growth. The increase of 8,300 jobs in August was the largest increase shown so far this year. On average Kentucky has added approximately 2,000 jobs per month so far this year,” said University of Kentucky’s Center for Business and Economic Research (CBER) Director Chris Bollinger, Ph.D. 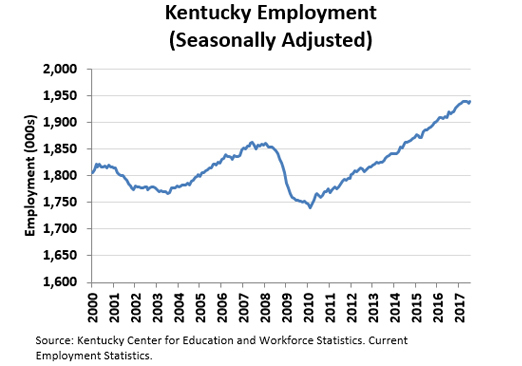 Kentucky’s professional and business services sector showed the largest employment gains, adding 3,400 jobs from July 2017 to August 2017. This represents an increase of 1.5 percent from July 2017. Within this sector, professional, scientific and technical services subsector increased by 1,200 jobs and the administrative, support and waste management subsector increased by 2,000 jobs.

Other services sector gained 100 jobs in August 2017. This sector is up 2,200 jobs since August 2016. Other services includes repairs and maintenance, personal care services and religious organizations.

Employment in the mining and logging sector declined by 100 in August 2017. This sector has declined by 400 positions, or 4 percent, since August last year.

The information services sector decreased by 500 jobs from July 2017 to August 2017. This sector has grown by 4.4 percent since August 2016, adding 1,000 positions. The industries in this sector include traditional publishing as well as software publishing; motion pictures and broadcasting; and telecommunications.

Leisure and hospitality decreased by 2,500 jobs in August 2017. Within this sector, accommodation and food services lost 2,300 jobs and arts, entertainment and recreation decreased by 200 jobs.

“While the number of jobs in leisure and hospitality decreased last month, this sector has generally increased since the beginning of the year,” Bollinger said.

Learn more about the Kentucky Center for Education and Workforce Statistics at http://www.kylmi.ky.gov/.